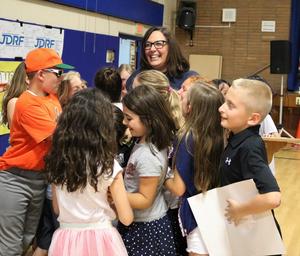 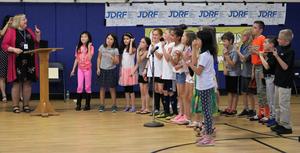 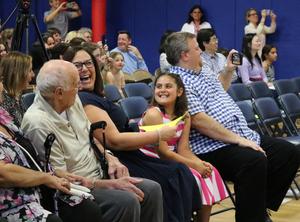 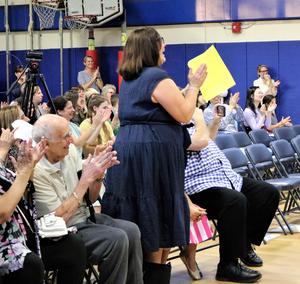 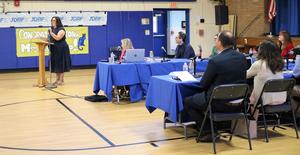 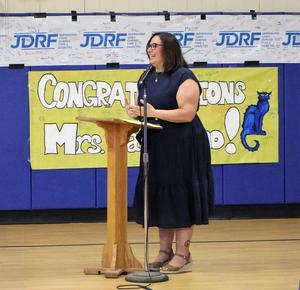 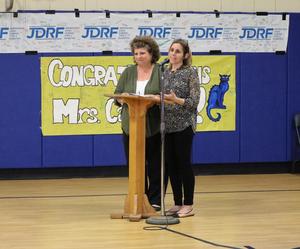 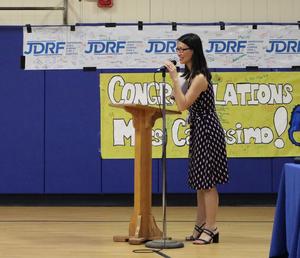 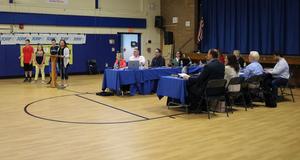 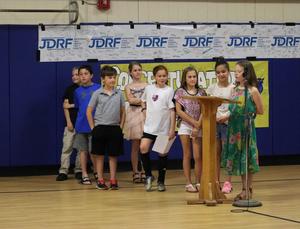 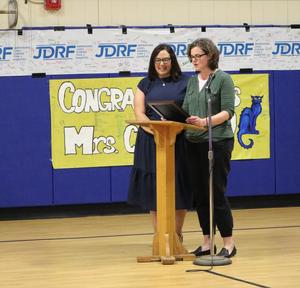 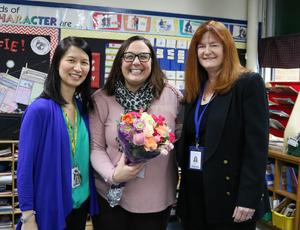 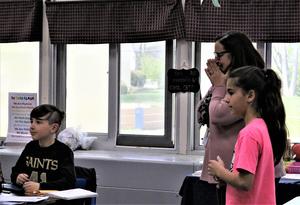 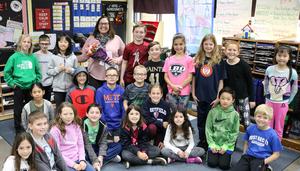 Anna Carissimo, a fourth grade teacher at Jefferson Elementary School in Westfield, is the 2019 recipient of the Rotary Club of Westfield’s Philhower Fellowship in recognition of outstanding teaching at the elementary school level.

Anna Carissimo, a fourth grade teacher at Jefferson Elementary School in Westfield, is the 2019 recipient of the Rotary Club of Westfield’s Philhower Fellowship in recognition of outstanding teaching at the elementary school level.

Carissimo received the award on May 7 as the guest of honor at the Rotary Club luncheon.  That evening, she was presented with a resolution from the Westfield Board of Education at its meeting held at Jefferson School.   Jefferson principal Dr. Susie Hung described Carissimo as “a positive role model” who is “highly positive and highly enthusiastic.”  Parents and colleagues sang her praises, while her students sang a song adapted specifically for Carissimo by Jefferson music teacher Wendy Woodfield.

“Mrs. Carissimo is a highly dedicated teacher who goes above and beyond for her students,” said Hung.  “She exudes warmth and caring and works closely with her students’ families throughout the year.  She has a positive outlook and contributes greatly to our school community.  Mrs. Carissimo is very well deserving of the Philhower Fellowship Award.”

“Teaching has always been a part of me,” Carissimo told the audience gathered at the board meeting as she thanked her parents for instilling in her that “there is no nobler profession.”  She also thanked her students, colleagues, and her family – husband Joe, daughter Isabella, and  Uncle Salvatore DeSimone, a longtime educator in Westfield who “was instrumental in my journey.”

Carissimo began her teaching career in 1997 after graduating from William Paterson University with a bachelor’s degree in Sociology and Elementary Education.  She taught for three years in California with “amazing teachers and administrators who nurtured my career early on.”  Homesick for her friends and family in New Jersey, however, Carissimo returned to the Garden State and began teaching at Jefferson School in September of 2000.

“I have been there ever since, making this my 19th year with the Westfield Public Schools,” she said in an email interview.  “I have taught grades 2, 3, and 4 in my tenure at Jefferson and there is no other school I’d rather call ‘home.’”

Carissimo earned her master’s degree in Literacy Education from Montclair State University in 2005 and is currently working toward a second master’s in Educational Leadership as part of The College of New Jersey’s Regional Training Center (RTC) program.

In nominating Carissimo, one parent noted the varied experiences, interests and learning styles of 4th graders and praised the fourth grade teacher for “differentiating on a level that is above and beyond, seeing her students as individuals, and insisting they become the best that they can possibly be.”

Another parent, who is also an educator, wrote that Carissimo “takes time to highlight the strengths of her students by praising their efforts and displaying their hard work” while noting Carissimo’s “impressive use of technology to enhance her students’ learning community.”

Another nomination letter by fellow Jefferson teachers Tania Bizink and Patricia Merlo, who also spoke at the May 7 board meeting, called the 2019 Philhower recipient “undoubtedly the face, heart, and future of Jefferson” who is “well deserving of such an honor.”  Other letters noted her warm smile, dedicated work ethic, and her willingness to serve beyond the classroom in organizing an afterschool STEAM program and as Jefferson’s Safety Patrol coordinator.

Paying a surprise visit to Carissimo’s classroom on April 29, Superintendent Dr. Margaret Dolan and Dr. Hung personally congratulated Carissimo on becoming the 27th recipient of the Philhower Fellowship, as her delighted students looked on.

When asked about one of her proudest moments as a teacher, Carissimo pointed to the process of “looping” when she taught third grade.  At one point in her career at Jefferson, as she prepared to move to the fourth grade the next year, her third grade families were given the choice of whether to have their student continue with her as fourth graders.

“I was astonished when every family made the choice to continue on with me into fourth grade,” she said.  “The bond I had with those students was very special and it was one of my proudest moments as an educator.”

She mentioned launching the Jefferson STEAM program with friend and colleague Nicole Amadeo as another highlight of her career and calls the program “a true collaboration between the teachers and families of Jefferson School which has brought amazing enrichment opportunities to the students at every level.”

“Most importantly,” she added, “I am proud of seeing my former students grow and mature into smart, successful young adults.”

Carissimo said that receiving the Philhower Award is “the most incredible achievement of my career to this point” and that she is honored to be named among the “inspirational educators” who were named Philhower Fellows in years past.

“Looking down the list, I see some of my most influential mentors – role models who have shaped me into the teacher I am today,” she said.  “So many of them were instrumental in showing me what it truly means to teach from the heart.”

Carissimo also credits her Jefferson School family, including Bizink and Merlo who she called “strong, inspiring educators who are my lifelong friends.”  “The teachers and staff of Jefferson School, each and every one of them are truly amazing people.  My recognition is a direct result of their constant support.”

The Philhower Fellowship was established in 1993 by the Rotary Club to honor former Westfield Rotarian Charles Philhower and to recognize the importance of teaching in the elementary grades.  An educator for more than 50 years, Charles Philhower, who died in 1962, was supervising principal (superintendent) of Westfield schools for three decades as well as co-founder and past president of the Rotary Club of Westfield.